Last week, 15,000 start-ups, tech influencers and entrepreneurs descended on Hong Kong for RISE Conference 2017. Here are 5 reasons why Tyk decided to join them.

As any marketing team will know, every month we receive invitations to attend various tech conferences, each with a different theme, audience or location.

Many of them sound like they’d be worth attending, but with so many to choose from, how do you know which one is the right one to spend your marketing budget on? Lean and fast-growing companies need to focus; after all, there are only so many events you can attend amongst everything else that needs to be done.

Plus, Tyk is a company proud to be committed to its product and its community. It’s not just a nicety to spend most of our time away from the event scene, collaborating, innovating, and supporting clients: it’s a necessity.

So, with all this in mind, why did we decide to attend RISE Conference 2017? Now that the dust has settled from last week’s conference, we’ll give you our 5 reasons why RISE was a good fit for Tyk.

But, first of all…

What is RISE Conference?

Produced by the team behind the highly popular Web Summit, RISE conference bills itself as ‘Asia’s largest and most important technology marketplace’. Almost all of the exhibitors are start-ups (600 in total), with the conference centring around a pitching competition.

The breakneck speed of today’s technological advances is mirrored in the format of the conference; every day the start-ups exhibiting change. This means there’s an enormous amount of energy in the room every single day, with new products to investigate and new faces to talk and debate with. So far, so Tyk (we love a debate). 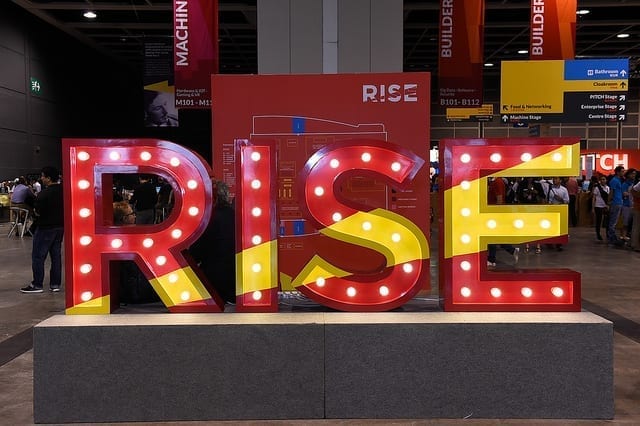 My 5 reasons why RISE Conference worked for Tyk

1. At RISE, the networking doesn’t end at 5pm

RISE positions itself a little differently to other conferences by actively embracing the fact that the best networking at conferences often takes place outside the walls of the event. Other organisations might pay lip service to this, but RISE goes all out, with events every single night from Opening Drinks on Monday to Closing Drinks on Thursday, with the Night Summit in between. Fair enough, everyone’s probably feeling a bit more inclined to mingle once they’ve had a couple of happy hour beers, but the Night Summit isn’t (just) about having a party. As well as being able to continue networking with clever and interesting people, it also features talks from more inspiring individuals sharing their stories and advice.

The evening events are also hosted by other start-ups either exhibiting or attending RISE which means that it’s in their interests to have meaningful conversations and get the attendees chatting to one another.  No standing on the sidelines wondering how to get stuck in (unless you like that, of course); it was the chattiest networking event I’ve ever been to – and I’ve been to a lot. Who said the tech scene was exclusive?

Speaking of exclusivity, another focus area for the conference this year was encouraging and celebrating Women in Technology.

Conversations around ‘Women in Tech’ really chime with Tyk. We are constantly evaluating and refining our hiring processes with a view to achieving as close to 50-50 male/female ratio as possible, across all parts of our organisation. Whilst a number of our function leads are women, we still have a way to go to achieve that target, and so I was keen to see how RISE approached the matter.

RISE recognise that women play an enormous part in running start-ups globally, but receive far less investment than start-ups run by men. So to help counter this, they offered heavily discounted tickets to women working in technology so that they could attend RISE. Though the male/female attendance wasn’t quite at 50-50, the official number was still a decent 40% – there’s no doubt in my mind that the number of women attending would have been lower without this initiative. The conference also had a strong anti-sexual harassment policy and dealt with the only visible issue (some innuendo-laden t-shirts) swiftly and firmly. 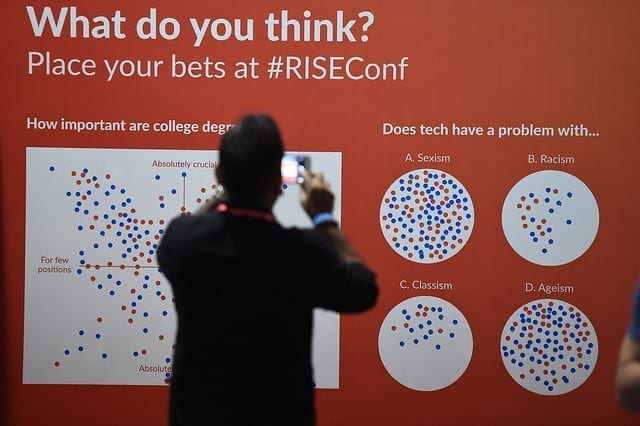 With a lot of recent (and depressing) tell-all articles about sexism in the industry, particularly around women seeking investment, it feels there are still much-needed public conversations to have. RISE hosted a number of Women in Tech roundtables to have these discussions, bringing businesswomen together to discuss core issues such as ‘Women in Tech: Beyond the Statistics’. This session discussed efforts to boost gender parity in the workplace and at the top of organisations.

As well as being full of varied ideas and passionate conversation, it was another opportunity to meet a lot of likeminded people and learn about the value their businesses add. My only suggestion would be for RISE to better market these sessions to men at the conference; all voices are needed to help drive change in our workplaces. A host of women turned out for a conversation on ‘Beyond the Statistics’ (RISE/Flickr, CC by 2.0)

3. RISE offers a window into global and regional innovation

With all this talk of attendee conversations, it would be easy to forget that RISE gets some world-class speakers on board to put their spin and analysis on the regional and global tech scene.

I headed to ‘Is the CMO role dead’ talk to, of course, assess the chances of my own career prospects in the age of big data and automation. Other favourites included a conversation on what we might have to fear from a connected world, and a talk on the future of fintech. All on-stage events were split by key themes including autotech, fintech and robotics. Sophie and Han the robot deep in debate (RISE/Flickr, CC BY 2.0)

But, without a doubt, my talk highlight had to be ‘Two Robots Debating the Future of Humanity’ (now that’s a sentence I never thought I’d write). In this talk, Ben Goertzel (Hanson Robotics), demonstrated advances in robot technology by facilitating conversation between two rather charismatic robots, Sophia and Han the Robot. The session was both awe-inspiring and somewhat terrifying.

4. RISE didn’t just talk about tech, it used it too

So you’ve just seen someone inspirational on stage and didn’t get to ask them a question. They’re then hurried away backstage and gone are your chances of grabbing them again. Right? Something that stood out at RISE was their conference app, which gave you access to directly contact every single person, speakers included, at the conference. The app also matches you to suggested contacts, based on the profile information you fill in.

This made a big difference to our time at RISE. A lot of big conferences in the tech space are all talk when it comes to improving the conference UX through tech itself. I’ve seen my fair share of sh*tty conference websites that barely make it clear how to get to the venue, let alone aid the experience whilst you’re there. This means that, as well as being an uninspiring experience for users, the organisers generally see limited uptake and wasted money. For RISE, you had to download the app just to get into the conference which drove downloads. As soon as you’ve logged in, your profile is out there, able to be viewed. You have to complete it or miss opportunities… and so pretty much everyone is not just on it, but checking it.

OK – it’s not going to blow the minds of the tech pioneers attending the conference, I give you that. But doing this small thing well, compared to others who do it poorly or not at all, ramped up our conference experience and, as last-minute attendees, enabled us to contact and meet over 150 people between us. I contacted one speaker from a global automotive brand, as I was watching their talk, and had a response back within 60 minutes!

5. RISE and Tyk: committed to community, openness and innovation

The common thread that seems to connect my RISE highlights is the real sense of community, openness, and innovation we found during our four days in Hong Kong.

We met tens of entrepreneurs, media and investors from Brazil round to Australia, with plenty of representation from South East Asia and China in between. Everyone we met was open to listening, learning, and discovering what collaborations are possible.

As a company focused on an open source, community product that connects people, things, and data, this was music to our ears. It was great to be able to tell burgeoning start-ups working on other insanely cool projects that, yes, you can use Tyk absolutely free and with no features missing. We also benefited from a lot of immediate feedback and advice, which we freely returned: collaboration in action.

From IOT powering mobile networks across Africa, to complex insurance comparison platforms, I learnt a lot about how Tyk can help other start-ups. I’m looking forward to seeing what game-changing use-cases could emerge for Tyk from out of our week in Hong Kong. And to next year’s conference, of course.

Me with just a few of the inspirational people I met at RISE Conference 2017: Carmen Lau (BiteUnite), Laila Bukhari (Microsoft) and Nina Moran (Aprilis Co)

For more information on RISE Conference, visit their website. And, whilst you’re waiting for next year’s conference, download our free Open Source API Management tool and build something cool with Tyk.