Last week, a 20-strong Tyk team downed tools and upped sticks to the French Alps for our first ever Tyk retreat. It was an opportunity for our global team to come together, collaborate on ideas for the year ahead, and eat a year’s worth of ham and cheese in 7 days.

But don’t just take my word for it. We’ve gathered together four of the Tyk team to tell you more.

The Tyk team are spread all over the world, so bringing them together is not an insignificant task.

For most people, the retreat week started with a flight from their local airport to Geneva which, if you’re on the correct side of the plane, has great views of Lake Geneva as you’re coming in to land. From the airport we shared a transfer across the border to the picturesque ski resort of Méribel in the French Alps where our chalet awaited.

For some of the Tyk team this was the first time they’d been able to meet in-person, so it was the perfect opportunity to socialise and get to know each other better. Once the BBQ had finished and the drinks were starting to flow we played the name game, which ranged from the sublime (Kim Kardashian) to the ridiculous (Lucrezia Borgia). It was a great way to kick off the retreat, preparing us for the week ahead. Matias’ first stop after flying in from Mexico via Madrid

The next day, it was time to get down to why we were all here.

We kicked things off with a director’s talk: our status, finances and growth (we’re very transparent). After looking at where we are now, we turned to focus on our future: our product vision, the horizon view and a bit of the philosophy that underpins how we like to run things.

Were you to hear it now, it would sound like we’re a hippy commune! But there’s a serious note to it: we take our responsibility as an employer extremely seriously – you could say we’re fanatically devoted to our staff, and one of the things that we really wanted to get across to our team was that when we make decisions, it’s for sustainable growth, not to burn runway.

More importantly, we went to great pains to underline that the only reason Tyk is what it is now, is because of the people in that room.

After this initial welcome the retreat days were structured around a work hard/play hard schedule, with workshops in the morning and then activities, food and entertainment in the afternoons.

The idea was to bring people together so that we could collectively tap into the well of creativity that is our global team; identify issues and opportunities that we want to solve; and then produce small, actionable projects that we could implement right there and then to enact change.

When you have a team like ours that is very product-heavy, with lots of techies, we want to break down barriers between teams. Just because someone is a driven sales guru doesn’t mean they don’t have insight into product and user experience, and just because someone spends their days neck-deep in code, doesn’t mean they can’t provide valuable ideas into content strategy and marketing. Since teams tend to operate mainly within their own spheres, we needed a good way to break down that behaviour and mix things up.

The outcome? Multi-disciplinary teams tackled three key themes, and generated real MVP’s that went live there and then. What was fantastic was that the teams all tackled their different themes in unique way, with little overlap, and each one generated solutions that were not just pure tech, but ran the gamut of multimedia, content, design, code and analysis. Some of the ideas were incredibly creative and inspiring, and really showcased what a talented group can do when they really put their mind to things.

But… we were also there to have fun, get to know one another better as people, and really get an understanding of who we are (and boy did we get that – I have a whole better appreciation of Quail farming than I had two weeks ago).

As Martin suggests, all work and no play makes Tyk a dull girl, so of course we needed some out of office action to complete the week. The Tyk Olympics began with some archery and blow darts, with a particular focus on ensuring various stuffed tweety birds were impaled along the way (no real animals were harmed in the making of this retreat).

Watersports made up the next set of activities, with wake and paddle boarding yielding different levels of excitement, and injury… Medics aside, we saw the emergence of some pro boarders amongst the Tyk ranks. Alex auditioning for The Hunger Games

We’re not (all) alcoholics, but it didn’t take too long to locate the only bar open within walking distance. We won’t divulge exactly how many evenings began there, and how long was spent there, but the bar staff were certainly pleased to hand over the bill each time. A dram of local speciality spirits was certainly also helpful during the night hike, alleviating the negative influence of a heavy downpour, though possibly diminishing our walking ability. Either way, we made it all the way to the top of the mountain! And back down. Kind of.

Plenty of cheese & ham, ham, cheese, bread, cheese & ham were taken on throughout the week to sooth any ill-feeling caused by the wine, alongside some intense Nintendo action, pinball wizardry and Ghostbuster screenings. 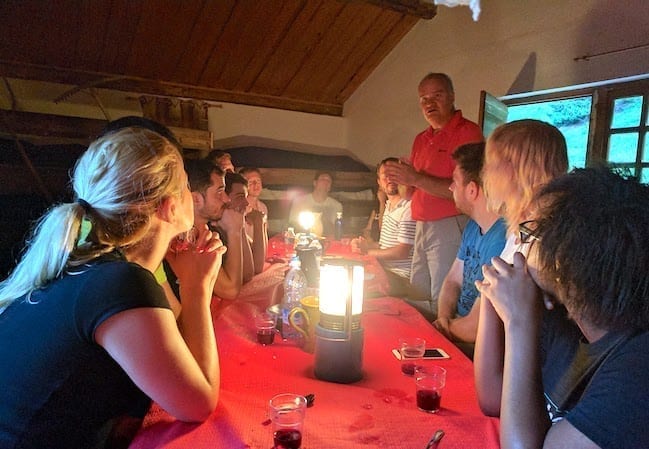 We came (eventually); we saw (stunning scenery); we Tyked.

Herding all the Tyk cats in one place was never going to be straightforward, especially with EasyJet involved, but eventually we were all in the same place at the same time. We threw ourselves enthusiastically into all the activities, both work and play. Although for some reason I can’t quite put my finger on, I didn’t get on with the wakeboarding.

So what did we get out of it?

What was your favourite part of the week?

Seeing the entire team in one place, focussed on a single goal. In a company that started off with two folks and where 99% of interaction is now handled via Slack, being able to see everyone together, focussed on a common goal, was incredibly rewarding – Martin

Hiking down a mountainside, through a thunderstorm, in the dark – Dave

Working on the hackathons together; it was really inspiring to see everyone work so collaboratively and creatively. The end results were really impressive – Emma

What did you learn from the week?

Oh yes, some of it not repeatable in polite society. I think what I learnt fastest was that our team can party hard, like really party… It was terrifying – Martin

How to do things with  the use of only one hand. Oh yes, and I learnt that there are exciting times ahead – Mark

Amongst many other things, I learnt who Lucrezia Borgia is… – Emma

That the Tyk team is diverse, creative and capable of great things – Dave

Like the sound of the Tyk approach to teamwork? We’re growing rapidly and have a wide range of exciting opportunities. Many of our roles are available remote, with flexible hours, and all members of our team have unlimited holiday. If you’re interested in joining us, find out more about our current positions.